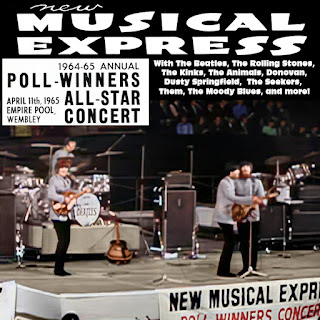 I read an interesting article today about how the sale of new music is continually falling to all time lows every year, while interest in older music continues to rise. It's a good article. I suggest you check it out:

As the article points out, there's still plenty of good new music, it's just that's not what gets promoted and makes it big, due to screwed-up record companies and other factors. Compare the artists on the top of the charts today to the quality of the mainstream artists at the time of this 1965 concert: the Beatles, the Rolling Stones, the Kinks, the Animals, Dusty Springfield, Them (with Van Morrison), the Moody Blues, Donovan, and many more, all sharing the same stage! Is it any wonder that lots of people (including me) are more interested in this kind of music than the generic, pre-packaged pop of today? The amount of sheer talent bursting up the charts in 1965 was staggering.

The reason so many big names played this one concert was because it was an awards show of sorts for NME - New Musical Express, a British music magazine. NME began giving out yearly poll winner awards in 1953, and continue to do it until this day (2022 as I write this). At least through 1968, there were annual concerts to celebrate the winners. But unlike most awards shows, this concert just focused on music instead of bogging things down with speeches and award presentations.

I would love to hear the 1966, 1967, and 1968 shows in full, since music just got better and better as the 1960s went on, in my opinion, and all sorts of interesting artists played in those later shows, including Cream, the Small Faces, the Move, the Beach Boys, Cat Stevens, the Who, the Yardbirds, and lots more, including more appearances by big names in this concert, like the Beatles and Rolling Stones. But I've only come across parts of the 1966 show, and none of the 1967 or 1968 shows. The full 1964 and 1965 shows are available on bootleg though, and I'm posting the 1965 one as I think it's more interesting, with these mostly British Invasion acts more fully developed by then.

The sound quality is excellent throughout. This concert was professionally recorded in order to be broadcast on British TV a short time afterwards. The TV version was edited down, but somehow luckily a recording of the entire show has made its way to the public. You can watch the entire thing on YouTube, though it's only in black and white.

This concert took place before artists typically stretched out with lots of soloing and jamming and such. These songs don't differ that much from their studio versions (with a few exceptions, like Them and the Animals). But I still think this is a fascinating listen, as there aren't many quality concert recordings from this early in the 1960s. In particular, there were many artists who were pretty big back in the day but have little to no surviving audio or video of them in concert. Even for major names like the Animals and Dusty Springfield, there's very little from around this time period. And for the lesser known acts, this is often the only evidence of them in concert that seems to still exist.

I'm a big Kinks fan, so a minor disappointment for me is that the Kinks only played two songs. Even at this early stage in their career they were a big enough name to deserve more time. Apparently, this has to do with them being late to the show. You can hear guitarist Dave Davies apologize about this between songs. According to some accounts, they actually played after the Beatles, as the very last act. However, the recording I used had them just before the Beatles, and that seems to fit in terms of the audience applause and announcement and such, so I'm keeping it that way.

As far as naming the artists for each song goes, technically I should have put the names of the emcee or emcees on many of the talk tracks. Some of those had band members talking, some had the emcees, and some where a mix. But rather than spend time dealing with all that, I just put the name of the act being introduced, for simplicity's sake. (Unfortunately, one of the emcees was DJ Jimmy Savile, who later was disgraced in a child molestation scandal. Thankfully, his role here is very minor.) I only put in the DJ names on the very first and last tracks, since those weren't linked to any particular artists.

A couple of the performers here are rather forgettable. I was tempted to cut out Freddie and the Dreamers and Sounds Incorporated in particular. But ultimately I decided it was best to present the entire thing unedited (although I cut out some annoying laughter by Freddie and the Dreamers between songs). Overall, I think the percentage of quality performers is quite high.

The Beatles only got to do a 15 minute long set, but it's nice that you can actually hear them perform instead of being totally drowned out by screaming, as was typical of the time. Apparently, the arena (Empire Pool, later renamed Wembley Arena), held about 10,000 people. I'm sure that, by 1965, the Beatles could have filled up a much larger venue in London all on their own.

This concert is two hours and 23 minutes long. I cut out some dead air between songs. But there was surprisingly little of that to begin with. Either this was already edited down, or this was a tightly run show.

There are a fair number of photos from this concert. However, the vast majority of them are in black and white. The only color one I've found is a photo showing only Brian Jones of the Rolling Stones. When I first posted this, I used a photo of the Beatles, but it turned out that was from the 1966 NME concert. So instead I took a screenshot of the Beatles in the 1965 NME concert video, and colorized that.

I took most of the cover text from advertisements of the show, though I added in the list of some of the artists.