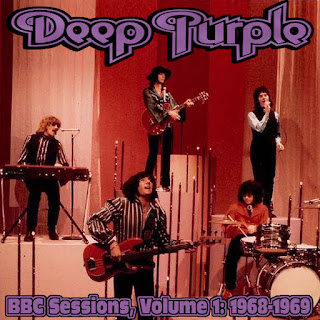 This album dates from 1968 and 1969, and features the Mark I version of Deep Purple. It's from a time when Episode Six still existed, in their last stages. The Mark I version sounded fairly different from the much more famous Mark II version, with Rod Evans as lead vocalist instead of Ian Gillan, and more of a pop rock song instead of a hard rock sound.

All of the performances here have been officially released on an album called "BBC Sessions 1968-1970)." But I feel I can add value by removing the BBC DJ talk over the intros and ends of some songs. On this album, there are only two such songs with that problem, the ones with "[Edit]" in their titles. There will be more on later volumes in this series. In all such cases, I used the audio editing program X-Minus to erase the DJ talking while keeping the underlying music.

This doesn't include all the BBC session from this time period, because the BBC made no effort to save their recording sessions, and some were lost to history. But it's not that big of a loss, in my opinion, because most of those lost sessions were repeats of songs included here, such as multiple versions of their first big hit, "Hush." I also searched for non BBC TV or radio performances, but there was nothing significant from this time period.

This album is 43 minutes long.

The cover art photo comes from a TV performance in 1968, but I don't know the exact details.