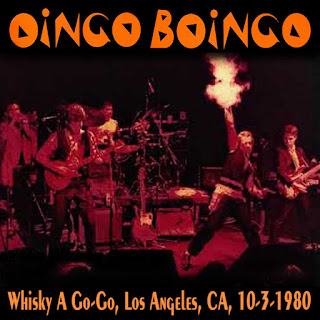 I recently posted a bootleg concert of Oingo Boingo from the Whisky A Go-Go that took place in August 1980. I mentioned I would post another one from the same venue, but later that year. Here it is.

As I mentioned with that post, there aren't many bootlegs from this band with really great sound quality. Weirdly, two of the best in terms of sound come from these Whisky shows in 1980, before the band's first album came out. With that show I already posted, it was professionally recorded so excerpts could be used in a movie. With this show, it was professionally recorded so it could be broadcast live on a local radio station. (You can hear lead singer Danny Elfman give shout outs to the station at a couple of points between songs.)

What I like about both shows is that they were from so early in their career that they performed some songs that they ultimately never put on any of their studio albums. In this case, those are: "I Was a Teenage Monster," "California Girls" (the Beach Boys hit), "Nature Zone" (an instrumental often called "Woke Up Clipped" on bootlegs), "Forbidden Zone," and "Louise." But this show is also longer than the other one I shared, at an hour and one minute, with a bunch of songs not played on that one, so if you're a fan of the band I recommend listening to both.

I found the photo for the cover art from a bootleg of this exact concert. I don't know if it's really from this show or not, and it's low-res. But I used it anyway, because I think it's a really cool photo. I think it would be lots of fun to have a