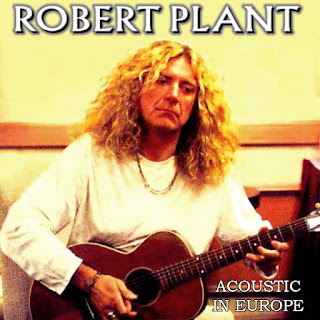 Robert Plant has often dabbled with acoustic music. The general vibe of the 1970 Led Zeppelin album "Led Zeppelin III" is a good early example. However, he never really put out an all-acoustic album. (The 1994 Robert Plant and Jimmy Page album "No Quarter: Unledded" has an acoustic-ish feel at times, but it's more of an attempt to redo Led Zeppelin songs with either orchestra backings and/or non-Western music styles.)

That said, in the early 1990s, acoustic music trended strongly, due mostly to the "MTV Unplugged" TV show. When Plant released his 1993 album "Fate of Nations," he wasn't entirely unaffected by this trend. He never did an entire all-acoustic concert then (or at any other time, as far as I can tell). However, he did perform songs in acoustic style from time to time, especially during short radio station appearances while on a tour of Europe that summer. This album collects a bunch of his acoustic performances from that tour, while trying hard to not include any song more than once. Additionally, he did some acoustic songs around that time on singles or later as bonus tracks, and I've added those as well. The result, in my opinion, is the best collection of Plant in acoustic mode in 1993 that you're likely to find on the Internet.

In the early 1990s, Plant rediscovered his love for folk rock music from the West Coast of the US in the late 1960s. He also was increasingly reconciling himself with his Led Zeppelin legacy, which would result in reuniting with his fellow Led Zeppelin leader Jimmy Page for the "Unledded" album and tour the next year. So the songs here are a mix of covers of some 1960s West Coast songs he loved, Led Zeppelin songs, and new songs Plant did. (The classic blues song "Hoochie Coochie Man" doesn't obviously fit into those categories at first, but it is a song Led Zeppelin occasionally did in concert.)

The first four songs here, plus the second to last one, are the only officially released ones, from singles or bonus tracks. I generally tried to avoid including any song more than once, as mentioned above, but I made two exceptions: for the Moby Grape cover "8:05" and for the Led Zeppelin classic "Whole Lotta Love." In the first case, Plant did an acoustic version for a non-album single released only in Britain, as well as an acoustic version done in concert. I thought they were different enough for both to merit inclusion. Similarly with "Whole Lotta Love," he did an acoustic version for a B-side as well as a concert version. In that song's case, the two versions are even more different from each other, because the B-side version was done in collaboration with guitarist Rainer Ptacek (who unfortunately died young), and Ptacek added a very interesting dimension to that version, in my opinion.

One other song worth mentioning is the version of "Stairway to Heaven" that ends this album. It's the only song here from 1994, and it's a collaboration with Jimmy Page. From what I understand, Plant and Page were very tired of this song by the 1990s, because it's a great song but it also is arguably one of the most overplayed songs of all time. As a result, they never played the song during the 1990s collaboration, with this one exception. This recording was done for a Japanese TV show, apparently due to a special request from their Japanese hosts. I like this performance a lot since it's done in a unique acoustic style, with just Plant singing and Page on a solo acoustic guitar. The downside is that the studio version of the song is about seven minutes long, and this one is only three minutes long. They did most of the acoustic first part of the song, but skipped the hard rock build up and soloing, going straight to the last line. Still, half of this classic song done in this style is better than none at all.

This album is 54 minutes long.

It's been a few years since I put this album together for myself, and it was that long since I found the cover art photo. I don't remember where it's from exactly, but I'm pretty sure it dates to 1993.