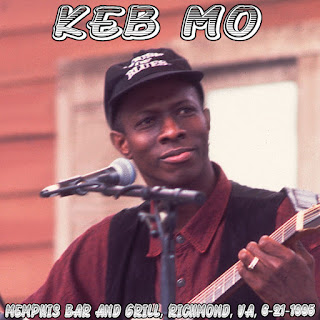 Having just returned from a long vacation, when I got back I searched the Internet for good music that has popped up while I was gone. One thing I came across was this bootleg concert. It's been around for years, apparently, but it was new to me.

I think Keb Mo is very talented, but I'm frustrated with most of his albums. I feel what makes his music special is when he plays the blues, especially acoustic blues, yet on his albums he often tends to go for a generic "adult contemporary" poppy sound. That wasn't the case for his debut album, 1994's "Keb Mo," which is one of his best. This is a solo acoustic concert from when he was promoting that album and was heavily into his blues mode.

Not surprisingly, he played nearly every song from that album. But the concert is twice as long as the album (an hour and twenty minutes), so he played many other songs too. Generally, that means some bluesy covers, as well as originals that would appear on later albums he did. There's one song I'm unsure of, but for some reason it has the title "First Class Ticket." If anyone knows if that's the real name of that song, or what the real name is, please let me know.

By the way, 14 years before the release of his first album using the name "Keb Mo," he put out an album under his birth name, Kevin Moore. This was before he really got into the blues, and the style was different, I understand. Interestingly, two of the songs here come from that album, "Rainmaker" and "Anybody Seen My Girl." He put a different version of the latter song on his 1994 album, and redid the first one on another album as well.

The sound quality of this show is excellent, and has to be a soundboard. If you like the sound of his 1994 album, you could almost thing of this as a super-sized all-acoustic version. As I usually do, I put the banter between songs on their own tracks. In a few cases, I removed some boring bits between songs, pretty much all guitar tuning or a DJ talking during encore breaks. Other than that, I didn't change anything.

I couldn't find a cover art photo for the exact concert in question. But at least this one comes from a concert in Chicago held the same month, June 1995.