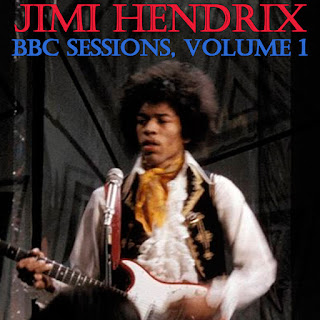 One clear highlight of Jimi Hendrix's recorded work are his recordings for the BBC. The sound quality and performances are just as good as those on his studio albums, and he played some interesting songs he never or rarely played in concert. Many of these performances were first officially released on the single album "Radio One" in 1988, and then more were released on the double album "BBC Sessions" in 1998.

The official "BBC Sessions" album certainly is a good one. But they missed a few songs. More importantly, there are some performances for TV or radio shows that sound just as good, except they weren't done for the BBC. I've expanded the reach of the "BBC Sessions" to include this non-BBC material as well. That has allowed me to make four albums of this stuff instead of two. This is the first one.

One nice benefit to putting these performances on four albums is that I have carefully organized them to reduce the number of times one album has two or more versions of the same song on them. For whatever reason, the vast majority of Hendrix's TV or radio appearances were in 1967. His song repertoire was small back then at the start of his fame, and he only had a few hits. So he tended to perform the same songs over and over again, especially "Hey Joe" and "Purple Haze."

Due to that fact, as well as the fact that there's a ton of Hendrix material out there, I've chosen to only include the versions that sound the best, without repeating songs too much. For this album, the only duplicate I have is two versions of "Hey Joe." Note that I've generally stuck to ordering these albums by the dates they were recorded. But I've made a few exceptions to reduce the duplications. So, for instance, I've moved versions of four songs ("Hey Joe," "Purple Haze," "Foxy Lady," and "Stone Free") that were recorded in early 1967 to the next album in this series.

Three of the 14 performances on this album are still officially unreleased. In addition, two more are from official releases other than either of the BBC albums. One of those, "Burning of the Midnight Lamp," actually was played on the BBC, but on a TV show instead of the radio. That one was only available as a rare bonus track for the "Jimi Hendrix Experience" box set.

I'm glad to say that none of these performances are marred by BBC DJs talking over the music. If there were instances of talking before or after songs, I've cut that out to keep the focus on the songs.

I've included one bonus track, an unreleased version of "Rock Me Baby." This also was played for the BBC. But unfortunately, the last minute or so got cut off, so I faded it out. I suspect that's why it wasn't included on the official BBC albums. The sound on that one is a little rough, but my associate MZ worked on editing it to at least make it sound better than it had been.

The cover art photo shows Hendrix playing "Purple Haze" at the BBC's "Top of the Pops" TV show in March 1967. I didn't include any music from this performance because he sang to the recorded version of the song.
Posted by Paul at 9:53 PM