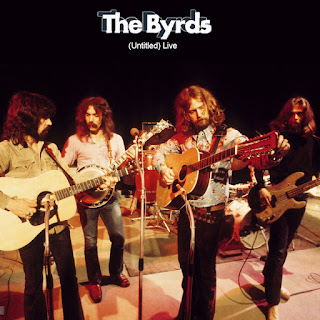 Ever so slowly, I've been making my way through improving the discography of the Byrds. The last album I'd posted was a 1969 stray tracks one. That takes me to 1970, and the Byrds album known as "(Untitled)." It's probably the most acclaimed Byrds album from their later era, after David Crosby and Chris Hillman left. It was a double album, with one of the albums all live material and the other all studio material.

I don't want to simply post a popular album here unless I made significant changes to it. In this case, even though "(Untitled)" it s a very good album, I felt it could use a lot of improvement. The main reason for the change is that a deluxe version of the album was released, with the name "(Untitled)/(Unissued)." As you can guess, that had a lot of previously unreleased songs. But, in my opinion, they were added to the end as bonus tracks instead of being integrated into the other songs in an intelligent way.

There was so much material that I was able to turn the single live album into a double album, which is presented here. The single studio album remains a single album, but with a significantly different song list. I'll post that shortly as a separate album.

All the live tracks here were recorded in New York City either on February 28, 1970, or March 1, 1970, with the exception of two ("Take a Whiff on Me" and "Jesus Is Just Alright"), which were recorded also in New York City, but in September 1970. That was the same month the album was actually released, but I'm including them here since they were chosen as bonus tracks.

The first six songs here are the songs that made up Side One of the original release. Side Two consisted entirely of a long version of "Eight Miles High." I've put that at the end, since it was the last song in their concerts at the time (not counting the short "Hold It" instrumental, which is also here). I made an edit to "Eight Miles High," which is why it has "[Edit]" in its title. This version had a fade in at the start. That's a shame, in my opinion, because I love the iconic bass notes that open the song. So I found the missing intro bit from a different bootleg version around that same time, and patched it in.

Most of the rest of the songs come from bonus tracks on the 2000 deluxe edition. But three more songs, "You All Look Alike," "Willin'," and "Black Mountain Rag (Soldier's Joy)" dribbled out on the band's two official box sets, so I included those too.

I think this works much better as a double album than the original single album, since it closely resembles a full concert. Admittedly, it's a bit short as concerts go, at only an hour and nine minutes. I could have added more songs from bootlegs dating that same year, but I wanted to keep this a collection of all officially released material, recorded with great sound quality.

The cover photo features the Byrds in concert in London in 1971. For the text, I imitated the look of the text on the original "(Untitled)" album.