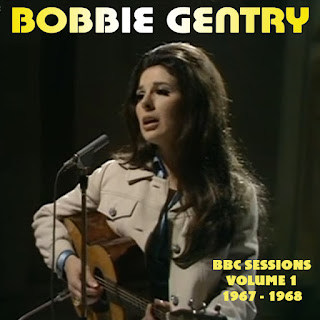 I'm continue to prioritize posting BBC sessions whenever I can. In making these, I've noticed that the vast majority of artists with enough material for BBC albums are British. Of course that makes sense for logistical reasons. But there are a few exceptions, usually American artists. Surprisingly, Bobbie Gentry is one of them. It seems she had an occasional BBC TV show. It only ran an average of couple of times a year for about three years, but she performed a lot of songs per episode.

There is an official Bobbie Gentry BBC album. Also, the 2018 box set "The Girl from Chickasaw County" included all the BBC performances from that, plus more. However, they missed a lot. I found lots of other performances she did for BBC TV and other TV shows, enough for three albums. I'm not sure why some of these haven't been officially released, as some of them come from the exact same BBC TV episodes as some songs that were released. But for whatever reason, I'm fixing that here. However, as usual, I'm only including one version of each song. That's especially important in her case, or I'd end up with a bunch of different versions of "Ode to Bobby Joe."

Gentry has a relatively limited discography, since she only put out albums from 1967 to 1971, then a small trickle of songs after that. So it's a pleasant surprise for me to find that she did a lot of songs on her BBC TV show and other TV shows that she never did in the studio.  As an example, consider that the first six of seven songs here were never officially released in any format back in the day, and all seven still remain unreleased.

I've included two songs only as bonus tracks. The bonus track version of "Louisiana Man" was performed just by Gentry. But I've included a different version that was a duet between her and the Hollies that I think is more interesting. Still, since the other version has been officially released, I figure it at least merits inclusion as a bonus track. The song "My Dog Sargent" is kind of a jokey lark of a song that she wrote when she was a little kid. I don't consider it worthy of repeat listenings, but it has been officially released as a BBC performance, so I included it as a bonus track.

This album is 45 minutes long, not including the bonus tracks.

The image I chose for the cover art doesn't have the best resolution. But I chose it because it actually comes from one of her 1967 BBC TV shows. I took a screenshot from a video of her playing "Ode to Billy Joe."