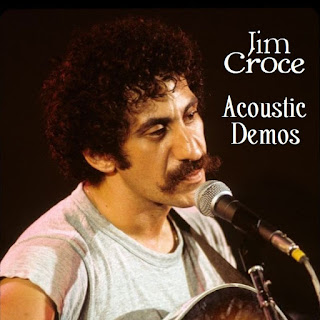 This is my first Jim Croce post, but it won't be the last. I feel that his music is sadly overlooked in this era, in part due to his early death in a 1973 plane crash only about a year after he became a star.

This collection is something I've never seen gathered together before, and frankly I don't know much about it. In short, these are many of his classic songs in demo form, stripped down to his his lead vocals and acoustic guitar. Croce's songs are generally acoustic sounding, but the studio versions often had strings, drums, and other instruments added. I love acoustic versions, so I really enjoy these versions.

I only recently came across this material as I was digging deeper into his music. Most of these songs are officially released, but on rather obscure releases, and spread out here and there. What little I know about the backstory comes from the liner notes to one of his collections ("The Studio Album Collection"), and goes like this. In 1969, Croce released an album that was performed with his wife Ingrid, and is known as either "Croce" or "Jim and Ingrid Croce." It didn't sell well at all, and his record company dropped him. Around that time, Ingrid got pregnant. He and she stopped touring and focused on their new baby and making enough money to get by. But staying at home, Croce had lots of time to write new songs.

In February 1971, he recorded acoustic demos for a bunch of new songs, and this new material was so strong that he got a new record contract. That resulted in the album "You Don't Mess Around with Jim," released in April 1972. It was a surprise hit, with two hit songs, "You Don't Mess Around with Jim" and "Operator (That's Not the Way It Feels)." Plus, after his death, the song "Time in a Bottle" was released from the album and went to number one.

I know that lots of these performances are from that demo, but I don't know which ones exactly. I realized that they include every single one of the 12 songs on the "You Don't Mess Around with Jim" album, so I've sorted the first 12 songs to duplicate that album order exactly. I'm guessing that February 1971 tape included most or all of those. But that still leaves another six songs. I've arranged it so the next four songs all come from his subsequent album "Life and Times." The penultimate song "Lover's Cross" comes from his last album, "I Got a Name." That just leaves the final song, "Mississippi Lady." It was first released on "The Faces I've Been," an album released in 1975 that gathered up some stray tracks. I'm pretty sure it was an outtake from the "You Don't Mess Around with Jim" album.

Most of the songs here come from three different official collections. But I searched on YouTube and found four additional songs that apparently remain unreleased, or perhaps are from some other official source that I missed. In any case, these four sound just as good as the rest. All the performances are excellent, but note that "Speedball Tucker" is less than a minute long. Since that's one of the officially released ones, I surmise that he hadn't finished the song when he recorded the demo.

Yet again, the album cover art was made by PJ of his "Albums I Wish Exist" blog. (By the way, that blog was recently deleted due to a copyright violation claim, but has reemerged at this address: https://albumsiwishexisted2.blogspot.com/)