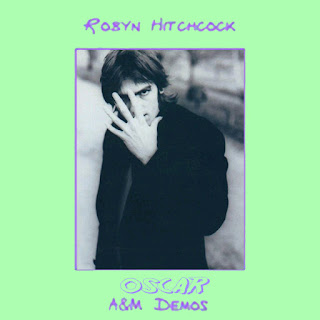 Followers of this blow know I've posted a lot of Robyn Hitchcock albums, and I've even started a series of albums just of Hitchcock's acoustic cover songs.

This is yet another acoustic covers album by him, except it's somewhat different. Those other albums generally collect songs from concert bootlegs. whereas this all comes from one source. I decided to keep this together instead of incorporating it into the long series of covers albums. A key reason is that the sound quality is a cut above, since these tracks were all recorded in a studio, so they sound a bit better than even soundboard versions of concert performances.

I don't know why Hitchcock recorded an album of covers in 1993. It's especially curious given that this came during his time with A&M Records, which produced his albums more heavily than at any other time in his career. I also don't know why the bootleg of this music is called "Oscar."

Getting to the music, Hitchcock has his usual great taste in covers. He does songs by Jimi Hendrix, Morrissey, Roxy Music, Bob Dylan, the Beatles, Syd Barrett, the Incredible String Band, and Richard Thompson. (One more song, "Polly on the Shore," is traditional, but Fairport Convention did a well known version.)

It's a short album, only 31 minutes long. It could have been longer, but I removed two songs because they were just repeat versions of songs already on the album, and were almost identical.

The cover is the exact cover of a bootleg of this album. However, that cover didn't have the word "Oscar" on the front, so I moved some text and added it in.
Posted by Paul at 6:39 PM