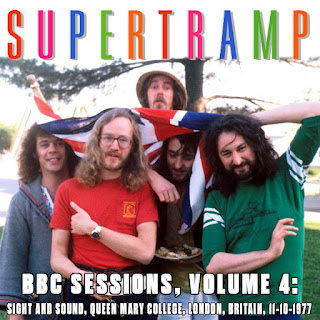 Here's the last of four volumes of Supertramp at the BBC. Like Volume 3, this is a full concert that was broadcast on BBC radio. The difference is that one was from early 1975, and this is from late 1977.

Between that concert and this one, Supertramp released two studio albums, "Crisis? What Crisis" in late 1975, and "Even in the Quiestest Moments..." in April 1977. Not surprisingly, this concert featured several songs from that 1977 album, including the hit single "Give a Little Bit."

This concert is an hour and five minutes long. I'm not sure if that's the complete concert, since it would be a rather short one for a headlining act. But it's all we've got. This concert remains officially unreleased, but the sound quality is as good as you'd expect from a BBC broadcast.

Apparently, parts of this concert were broadcast by the BBC at different times. The bootleg I took this from used no less than five different sources to present the songs with their best sound quality.

The band's next album, "Breakfast in America," would be a massive blockbuster, selling four million copies in the US and over 10 million worldwide. Unfortunately, it seems the band got so big that they decided they didn't need BBC promotion anymore, because I can't find anything they did for the BBC after this. One of the band's two lead singers and songwriters, Rodger Hodgson, left in 1983, so I'm not that interested in the band after that point.

That said, I do plan to post a live album of the band from 1979, in order to include their great "Breakfast in America," but it's not a BBC related recording.

The cover photo is from 1977. I would have preferred one of the band in concert, but at least it's in color and from the appropriate year.