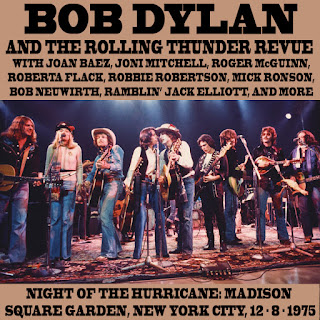 In 1975 and 1976, Bob Dylan put on a concert tour called "the Rolling Thunder Revue." It's something he's never done before or since, because instead of putting on regular concerts with himself as the main musician and one or more opening musicians, this was more like a traveling road show. Yes, Dylan was the main star, but he shared the spotlight with other big stars too, as well as lesser knowns.

Here it is, in all three hours and 50 minutes of it!

If you want to hear just one full Rolling Thunder Revue concert, this is the one, for several reasons. For starters, this concert had a special purpose, to help free professional boxer Rubin 'Hurricane' Carter from prison. Dylan (and many others) felt Carter was unjustly imprisoned, so he wrote a song about it, "Hurricane," which would be included on his 1976 album "Desire." I don't want to go into the full story, but if you want to know more, I suggest watching the 1999 movie "The Hurricane" starring Denzel Washington. Although the concert was still part of the tour, it was given the special name "Night of the Hurricane." Many famous people attended it, and there was a lot of press about it, helped by the fact that it was held in New York City.

Given all that, it's a lucky break that there's a soundboard bootleg of this entire concert with fantastic sound quality. This sounds just as good as any of the officially released material from the tour. Also, it's from a sweet spot in the tour where the musicians had found their groove but hadn't grown bored or fatigued (as would happen with many of the 1976 shows on the tour).

Furthermore, many of the musicians here played for all or most of the tour, like Roger McGuinn and Joan Baez. But this concert gets an extra lift with the special guests Joni Mitchell and Roberta Flack. Mitchell did play on some other shows during the tour, but this is as good as it gets in terms of sound quality for her set. And this was the only show with Roberta Flack. Also, Robbie Robertson from the Band played guitar on "It Takes a Lot to Laugh, It Takes a Train to Cry" and possibly a couple other Dylan songs.

Another special guest was boxing legend Muhammad Ali. During the show's intermission, Ali came out on stage and gave a speech about the point of the show, raising public awareness and pressure to release Rubin 'Hurricane' Carter from prison. During this speech, Ali spoke on the phone to Carter from his prison cell. Some other lesser knowns spoke as well, including some politicians. All in all, this segment took up half an hour. It's fine to listen to it once, but I don't think it stands up to repeat listenings. So I've brutally edited than half an hour down to just five minutes, focusing on Ali's phone call with Carter.

A lot of the what is cut out is unnecessary fluff. For instance, Ali got sidetracked and spent a few minutes praising a politician friend of his, who he claimed was going to run for president. (I looked it up, and that person did run for many offices, but never won anything.) Later on it the concert, Dylan, with his great sarcastic wit, makes a reference to this by introducing another musician and commenting that person is NOT running for president.

At nearly four hours, this is probably the longest album I've posted on my blog so far. It's so long that I've had to break the zip file into two. (Dylan prominently features in both.) If it was just one file, it would be over 500 mg, and Zippyshare has trouble with that. If it's too long, you might want to cut out some of the lesser known artists near the start of the show. Together, they make up about 40 minutes of music. But personally I find that part worthy of inclusion. Each one generally only played one song, probably their best or close to it, so nobody outstayed their welcome.

I believe the cover photo comes from the final bows after the last encore. Going from left to right, I believe that's Roger McGuinn, Joni Mitchell, Ramblin' Jack Elliott, Dylan and Baez sharing the center microphone, then Rob Stoner, Bob Neuwirth, Steven Soles, and Ronee Blakely. Thanks to loneill for help with identifying everyone.