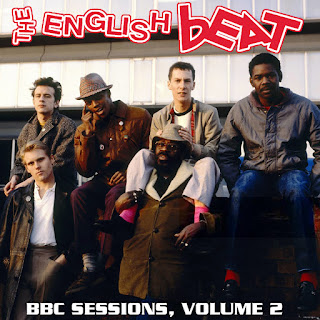 Recently, I posted an album of the English Beat at the BBC. (Or, for those in Britain, just the Beat.) Here's the second and final volume.

The first volume was really easy to make. It consisted entirely of BBC performances taken from album bonus tracks. This album has a lot of that. Specifically, six of the eleven songs are BBC performances from more album bonus tracks. But I felt those weren't enough to give an adequate picture, because the band only did one BBC session in the 1982/1983 time frame. So I've added in some live songs that I feel are important songs for the band. Most of these also come from album bonus tracks. There were a few more I could have included, but I didn't do that to avoid duplication of some songs.

The only song here that isn't sourced from a bonus track is the last one, "Ackee 1 2 3." Personally, that's my favorite deep cut of theirs. Between this BBC volume and the first one, you basically get an excellent double album greatest hits collection. I wanted to make sure that song was included too. But since I couldn't find a bonus track version, I ended up using a version from a rare but officially released album of the band playing at the US Festival in 1983. However, with this and the other live songs here, it's hard to tell they're live versions, except sometimes for some applause at the end.

This album is 38 minutes long.

The album cover photo is a promotional photo of the band, I think from 1983.