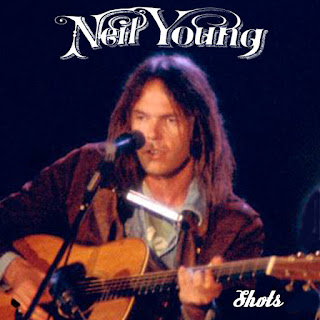 Here's the fourth Neil Young post of the day! I want to get my reorganization of his mid-1970s stray tracks material all done at once. If you look at any one particular album, you might wonder why some songs were or weren't included. But hopefully it makes more sense if you consider all four together.

Neil Young has long had a habit of writing a song and then not releasing it for years afterwards, sometimes waiting decades. For all of these stray tracks albums, I've imagined that he released his songs in the normal fashion, putting them on an album a year or two later at the most.

I've also disregarded the Stills-Young Band album "Long May You Run." I've tried to find solo versions of those. For "Midnight on the Bay," I found a good live version. But although he did play "Ocean Girl" a few times in concert, none of them had good sound quality. So instead I used the "Long May You Run" version. I didn't include "Fontainebleau" from that album, because I consider it a weak song by Young's usual standards. "Evening Coconut" is a Stills-Young Band live performance, but that song was never officially released.

"No One Seems to Know" was finally released on the live archival album "Songs for Judy" in 2018. "Cryin' Eyes" came out in a very different version on the "Life" album in 1987. "Lost in Space" and "Captain Kennedy" were both recorded in 1977, but not released until the 1980 album "Hawks and Doves." A different version of "The Ways of Love" was included on the 1989 album "Freedom." A rocking version of "Shots" was included on the 1981 album "Re-act-or," but this is an acoustic version.

The song "Long May You Run" was written in 1973, if not earlier. He didn't release it for a long time because he hoped it would go on a Crosby, Stills, Nash and Young album, which never happened. Instead of using the famous version from the Stills-Young Band album of the same name, I chose an unreleased 1977 version he did in concert with the Ducks.

That leaves just "Windward Passage" and "Lady Wingshot" as songs that are still unreleased in any form today.  "Lady Wingshot" is a song about the famous female sharpshooter Annie Oakley, by the way. This version of "Windward Passage" sounds great, and comes from a soundboard, but it got cut off before it ended. However, I faded it out at a point where I feel it sounds finished.

There's at least one more unreleased original song from this time period, "Bright Sunny Day." Young only played it one time in concert, in 1978. Unfortunately, the bootleg recording of it sounds terrible, so bad that I couldn't even bear to include it as a bonus track. But if you're curious, you can find it on YouTube.

1978 is not just the chronological end of this album, it was the end of an era for Young. He had two hit albums in 1979, "Rust Never Sleeps" and "Live Rust." But they were recorded in 1978. He didn't play any concerts or do any studio recording in 1979 at all, because he'd given birth to a child with cerebral palsy, and taking care of him would end up taking 15 of more hours of his day, every day, for the next few years. So Young's 1970s flood of songwriting creativity ends in 1978. In my opinion, it would take him a long time to fully get his groove back.

The cover art photo comes from a Crosby, Nash and Young (no Stills!) concert in Santa Cruz in August 1977. I cropped the photo so that Crosby and Nash aren't included.
Posted by Paul at 7:51 PM