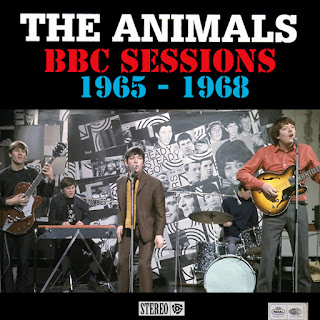 I have to be honest: I'm not a huge fan of the Animals. I think some of their songs are outstanding, especially their hits, but I also think a lot of what they did is just okay. I don't have all their songs in my music collection. But still, here's an album of really good Animals songs, and only two of them have been released as obscure bonus tracks.

I'm continually impressed at what a huge favor the BBC did for music lovers. Due to some bureaucratic rules, I think having to do with union employees, the BBC required many artists to create unique performances just so their songs would be played on BBC radio. The band would get to record the song in advance, but they'd usually get one take only, plus maybe a minimum of overdubs. Many bands decided to use the opportunity to branch out and play songs that they never officially recorded and released.

The Animals are a case in point. I found an entire albums' worth of BBC performances by that band. As I mentioned above, only two of the songs have been officially released as album tracks, specifically "Jailhouse Rock" and "Heartbreak Hotel."

What the heck is the record company owning the rights to the Animals' music catalog thinking?! The Animals used to be really big back in the 1960s, but these days not so much, and I suspect some of that has to do with the near total neglect of their musical output. Incredibly, there's been no official release of their BBC performances, nor any live albums from the 1960s (other than some marginal stuff from before they got famous), nor any box set or other well-put together rarities collections.

I don't get it. Why are so many albums that should be released not released, in general?! It's like turning down free money, since the effort in, say, gathering up some BBC performances and releasing them would be minimal. The vast majority of other 1960s bands as important as the Animals have done that, so why not them? Arrgh!

Anyway, this album is mostly made up of covers of very famous songs. I suspect that's why they didn't get recorded for albums back in the day, because the Animals wanted to concentrate more on their originals, plus obscure covers. But the fact that the songs are classics pretty much guarantee they'll be good, even for only a moderate Animals fan like me.

There are only a handful of obscure songs, such as an original instrumental blues called "McCollough's Blues" (named after one of the band members), as well as rarer blues covers like "Wee Wee Hours" and "The Same Thing." One particularly intriguing and excellent performance is of a lesser known Rolling Stones song, "Connection." Most bootlegs have a muffled version that gets cut short, but I luckily was able to find a clear sounding version that is complete.

The sound quality isn't always excellent for this album. A few of the first seven songs are a bit rough. But then it gets better until the end.

I made serious edits to two songs. For "Lawdy Miss Clawdy," I found two versions of the same performance. One sounded better than the other, but it was missing the first 15 seconds or so. Thus, I patched in the beginning of the other version to create a complete performance that's mostly at the better (but still not great) sound quality.

The other major edit was much more significant and complicated. The Animals did a nice version of Tim Hardin's classic song "If I Were a Carpenter." But for some reason, on all the bootlegs of this, the song fades out in the middle and there's a chunk that's missing. As it so happened, the missing chunk started a few seconds into a flute solo, just after the second verse. I ditched that solo fragment and had the song repeat a chorus instead, which is what a song usually does after the second verse anyway. Then I was able to merge the end of that chorus with the rest of the second chunk of the song. So now it sounds like one complete performance.

For some of the other songs, I made some lesser edits where I erased the DJs talking over the beginnings or ends of songs. Unfortunately, in a few cases, that meant getting rid of the intros of songs, because those damn annoying DJs often talked right until the very moment the vocals began. In addition, some songs had drastic volume drops at random points. I was generally able to fix those.

There were a few songs I didn't include for various reasons. For instance, there's a version of "Baby, Please Don't Go" that didn't make the cut due to sound quality problems. I also didn't include a song called "Rosie" even though it sounded good, because it appears the band later took this song and made their own words to it. I didn't like having two songs so disturbingly similar to each other.

Note that of course there are many more Animals BBC performances of songs they did officially record that are floating out there on bootlegs. I didn't deal with any of those, since my interest in the Animals isn't that great, as I'd mentioned already. But presumably the record company could make a really killer double or even triple album of those songs, plus these, and hopefully generally with even better sound quality. Let's hope they see the light someday.

For the album cover, I happened to find the cover of a bootleg that worked quite well. The photo used on that cover is actually of the Animals playing at the BBC. I had to change the album title, but I kept the same colors and fonts for that, because it looked good. I also added in record company and stereo logos from other Animals albums at the bottom to make it look more authentic.
Posted by Paul at 6:49 AM